at Online Streaming
This event has passed.

“One of the top ten films of the year…A character study and a cityscape movie, it merges inside and outside in a stranger-in-a-strange-land narrative about a West African immigrant working as a bicycle cop in Seattle.” – Amy Taubin, ARTFORUM

Co-written by Seattle critic and journalist Charles Mudede (whose weekly writings include The Stranger’s crime blotter column, “Police Beat”) and produced by Seattle locals Jeffrey Brown and Alexis Ferris, POLICE BEAT presents a unique protagonist in the post-911 world: a morally upright, Republican Muslim police officer. The film follows African-born Seattle bicycle cop (“Z”) on his beat for seven days and six nights, covering more than forty crimes, all of which are based on actual Seattle police reports, in its 80-minute running time. Starring as Z is Pape S. Niang, a non-actor who was formerly a member of the Senegalese Olympic soccer team.

POLICE BEAT is a highly unconventional crime film in which the protagonist Z is so preoccupied with his possibly unfaithful girlfriend that he never once acknowledges criminal world that swirls around him. The crimes Z encounters become mirrors of the his turbulent inner state, allowing him to philosophize about his unstable romantic relationship as well as his own development as an emotional being. While Z’s regular interactions are in English, his thoughts – the film’s narration – are in his native Wolof, the primary language of West Africa. In this way, POLICE BEAT is an unusual portrait of an immigrant new to the United States that focuses less on the protagonist’s socio-economic difficulties than on his emotional responses to American life.

This event is part of Police Beat. 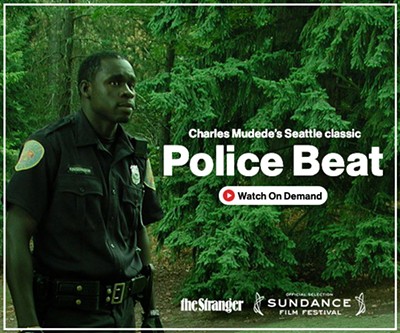