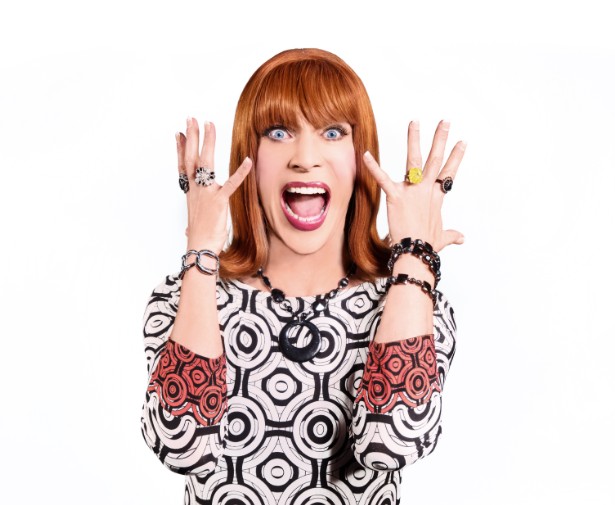 at Unicorn - Narwhal
Online ticket sales have ended, but additional tickets may be available at the door for $25 each.

Ever since becoming a YouTube sensation Coco Peru has been inundated with emails from people of all ages asking her the same question, “Coco, what is the secret to a happy life?” So, being the giver that she is, Coco wrote a new show A GENTLE REMINDER – COCO’S GUIDE TO A SOMEWHAT HAPPY LIFE where, through story and song, Coco shares with her audience a step by step guide that leaves you prepared to enter the world again ready to create your very own “somewhat” happy life. Why just a “somewhat” happy life? Well, let’s face it, you wouldn’t want to be happy all of the time because, always remember, “happy” people make such a racket.

Storyteller/monologist Miss Coco Peru aka Clinton Leupp got his/her start as a downtown favorite in the cabaret world of NY after he wrote, produced, directed, and starred in his first show “Miss Coco Peru in My Goddamn Cabaret” over 20 years ago.

On screen, Miss Coco is best known for her roles in Jim Fall's feature film, trick (Sundance 1999) and Richard Day's Girls Will Be Girls. (Sundance 2002) For this film, Coco shared the Best Actress Award with his two co-stars at the HBO Comedy Arts Festival in Aspen as well as the Best Actor Award at LA’s Outfest Film Festival. Other film appearances include To Wong Foo, Thanks for Everything, Julie Newmar, Nick and Jane, and Straight-Jacket. Coco can be heard in the Disney animated feature, The Wild as Mamma Hippo! She also appears in the highly-ish anticipated sequel of Girls Will Be Girls which will be released some day, hopefully.

Coco has appeared on TV in two stand-up comedy specials on LOGO: Wisecrack and Dragtastic, How I Met Your Mother, Arrested Development, Twins, Will and Grace, New York Undercover, Detroit 187, several Bravo reality and clip shows, and in an Orbitz commercial that was nominated for a GLAAD Media Award.

Coco’s recent online Youtube videos have been seen by over 2 million viewers. Her video “Coco Goes to KMART,” in which she searches for Celestial Seasoning Tension Tamer tea, has more than over 700,000 views. For this reason, Coco has had to ask her fans to stop sending her the tea. She has received close to 100 boxes!

Considered The Hostess with that something extra... Coco has hosted dozens of events including: The GLAAD Media Awards in Los Angeles, Night of a Thousand Gowns in NYC, Chicago Takes Off, Hot and Dry in Palm Springs, Gay Days Anaheim, The Black and White Ball in Reno, LA’s OUTFEST Legacy Awards, the BALIF (Bay Area Lawyers for Individual Freedom) Dinner in San Francisco, Project Inform’s 25th Annual Fundraiser (SF) and Charity Bingo at Harrah’s Atlantic City. She has been honored to be involved with countless Gay and AIDS related charities over the years including The Trevor Project, Aids for Aids, and Lifeworks Mentoring. In fact, the list is so long, the Los Angeles Gay and Lesbian Center honored Coco with the Board of Director’s Award. The award was presented to Coco by Zachary Quinto (Star Trek, Heroes, So NoTorious).

She is also available for children’s parties.