KEXP & 50 Feet of Song present Tower Of Song : A tribute to Leonard Cohen

“Now I bid you farewell, I don't know when I'll be back. They're moving us tomorrow to that tower down the track. But you'll be hearing from me baby, long after I'm gone. I’ll be speaking to you sweetly from a window in the Tower of Song”

Join us for a night of song and a celebration of the work and life of the late L. Cohen. We will start the evening with a screening of the rarely seen documentary “Ladies and Gentlemen, Mr. Leonard Cohen”  —an intimate look into his life as a poet before he made it as a songwriter. We will end the night with a candle-lit sing-a-long of “Hallelujah” by Grace Love-filmed by 50 Feet of Song. In between will be filled with performances by Star Anna, Josiah Johnson, Jason Dodson, Hart Kingsbery & Caitlin Sherman and more as they pay tribute to one of the greatest songwriters of our time.

This evening will be a benefit for Rain City Rock Camp for Girls to help ensure that many more voices will be heard in the future.

Inspired by the visionary field recordings of Alan Lomax and the direct cinema of the late '60s, we hit the road all over the Pacific Northwest recording artists at festivals, in hotel rooms, back alleys, and on front porches creating new field recordings in the folk tradition.  50 feet of super 8 film measures out to about 3 minutes of record time. This 3 minutes also mirrors the standard length of a song, a convention left over from the physical limitations of 78rpm records.  It's within these confines that we set out to record original sessions of the songs of our time. We also believe that behind every good song is an even better story. In addition to shooting sessions, we are deeply interested in the personal narrative that surrounds the craft and reveals to us the beating heart behind the song.  See sessions and more info athttp://www.50feet.org. 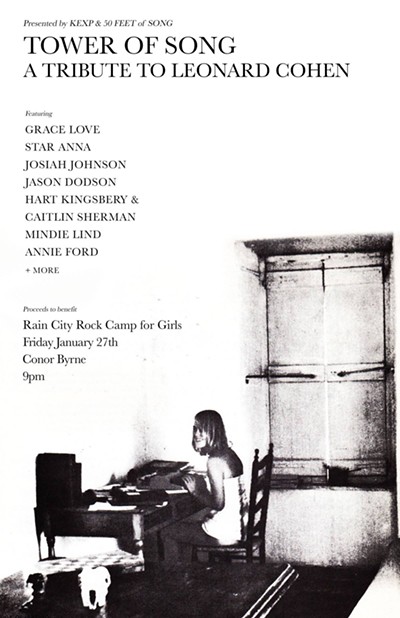