TROVADORO is guided by Santiago de Cuba's Kiki Valera and his lifetime of extensive performance, international touring, arranging, recording, and mastery of the Cuban Cuatro. Kiki is the eldest son and director of La Familia Valera Miranda - one of Cuba's most revered families of Son musicians. Justin Maggart and Steve Smith are core members of SuperSones - a traditional Cuban septet that has performed Cuban Son in Seattle and throughout the Pacific Northwest for the last 16 years. Javier Marú brings years of experience playing Trova and Son in Havana, Switzerland and now in Seattle with Trío Cubay and others.

The quartet is TROVADORO's core performance format. The group frequently performs as a quintet with Lalo Bello on Congas and Vocals (Picoso, Polyrhythmics & Trío Cubay). For large venue dance performances, private events or other occasions, additional supporting musicians may include a trumpet player, bassist or singer & percussionist.

TROVADORO began as a collaboration between Justin Maggart and Kiki Valera to compose, arrange and record an album of original songs in traditional Cuban styles and perform them for a variety of audiences in Spring 2017. In June 2015, this project was funded, in part, by a grant from King County 4Culture. TROVADORO also educates diverse communities about Cuban music by leading interactive multi-media concert-workshops for audiences of all-ages.
Website
Facebook 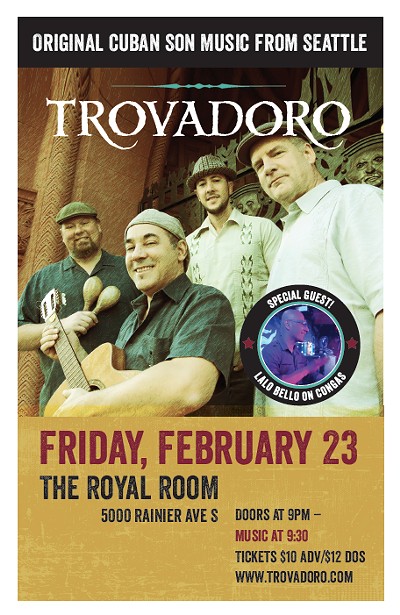