Doors at 7:00pm
Tickets: $10 adv/$12 dos
To guarantee a good seat, please make your dinner reservation by emailing reservations@theroyalroomseattle.com
Advance tickets can only be purchased online. We do not sell advance tickets at the venue.

Anthony Coleman and Wayne Horvitz are two pianists/composers known for their early association in the “downtown scene” in NYC in the 80’s, and for their prolific work as composers, band leaders, and keyboardists ever since.

Coleman and Horvitz first met on the Lower East Side in Manhattan in the very late 70s’. Horvitz tells it like this:

I don’t actually remember the first time I met Anthony, but for a while it seemed like we were joined at the hips. We probably first came together through John Zorn, and Anthony was around on all the scenes at that time, with his brilliant playing - and eccentric commentaries. Zorn often used us together, especially in larger configurations like Cobra.. Some of my first touring in Europe was with Cobra, and besides Anthony we had quite a band including Zeena Parkins, Bill Frisell, Christain Marclay, and many many more.

Anthony came from a wild background. His parents were involved in the early days of the Village Voice, and as a kid Anthony used to follow the Duke Ellington band around, and they loved him, and they allowed him backstage! He is a true scholar of music, of all sorts, and as brilliant an intellectual as he is an iconoclast. He played in a million projects, including Marc Ribot’s Los Postizos Cubanos, and now teaches improvisation and composition at the New England Conservatory, from which he graduated in the 70s.

Early on in our friendship Anthony and I discovered that we were born within 48 hours of each other in 1955 (full disclosure-both Virgos). But it wasn’t till years later that we uncovered the whole story. I was talking about how my grandmother had dried out at Doctor’s Hospital in Manhattan in the 30s. Anthony mentioned that Bela Bartok wrote “Concerto for Orchestra” there, and then added, “And I was born there too”. To which I replied, “So was I!”. Of course, in those days mother and child stayed in the hospital for at least a few days, so we can assume we were nursery mates. Maybe even switched at birth! 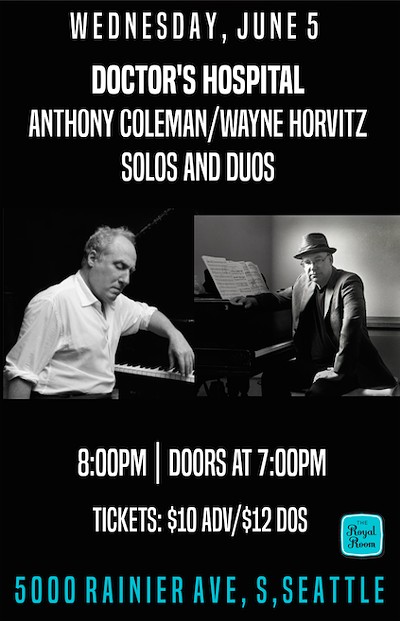