Luke Fitzpatrick is one man. He is a founding member and artistic director of Inverted Space, a Seattle-based new music collective. Recent solo performances include the complete Freeman Etudes by John Cage, Luigi Nono’s La Lontananza Nostalgica Utopica Futura with André Richard and Marcin Pączkowski and the music of Harry Partch at the Teatro Colón in Buenos Aires, Argentina, Pittsburgh’s Beyond Microtonal Festival and the University of Illinois. He has worked personally with composers such as Brian Ferneyhough, Helmut Lachenmann, Ben Johnston, Charles Corey and Qasim Naqvi. Additionally, he has performed with Deltron 3030, The Penderecki String Quartet, The Moth, The California EAR Unit and is currently concertmaster of both Seattle Philhamonic and Seattle Festival Orchestras. In 2017 he was selected as an Artist-in-Residence by the Jack Straw Foundation to record The Complete Works for Adapted Viola and Intoning Voice by Harry Partch. As a composer, his works explore the passage of time, memory and nostalgia. They have been commissioned and performed by The Harry Partch Instrumentarium, Figmentum, The Parnassus Project and an upcoming work for the Morsel Trio. Luke holds degrees from the University of Missouri-Kansas City, CalArts and the University of Washington. He previously served as Artist-in-Residence at the University of Washington.

French-born pianist Laure Struber has been playing the piano since the age of 3 years old. She came to the United States as a Fulbright Scholar in 2010 to study at the San Francisco Conservatory of Music, where she earned a Master’s Degree in Piano Performance under the guidance of Professor Mack McCray. She moved to Seattle in 2014, and was the lead Teaching Assistant for the University of Washington School of Music Secondary Piano Program for three years. Most recently, she earned her Doctorate of Musical Arts in Piano Performance from UW. Her thesis focused on a modern examination of the works of Marie Jaëll, a 19th Century scientist-musician who spent decades studying neurology, hand physiology, and how these studies interacted with musical and artistic development.
Since the age of 15, Laure has performed widely throughout Europe and in the United States as a soloist and chamber musician, and performed for prestigious ensembles such as the Strasbourg Philharmonic Orchestra, Inverted Space Ensemble, the Seattle Philharmonic Orchestra and String Orchestra, and the Harry Partch Ensemble. She has received numerous awards, including a France-Fulbright Alumni Distinction, a Marina Grin Award, and a Soroptimist Prize. She also won the UW Concerto Competition in 2015, performing the Chopin e minor Concerto.
Laure is also very involved as a music educator, and has taught students of all skill levels for more than a decade in France and in the United States. Determined to bring music to everyone, she created workshops for children with learning difficulties and disadvantaged social backgrounds. She currently teaches in the Seattle area. 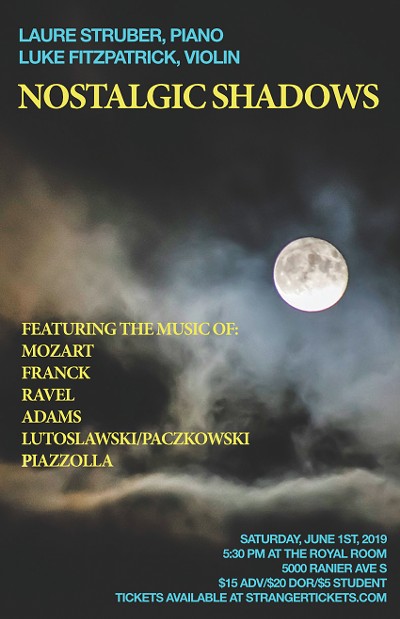