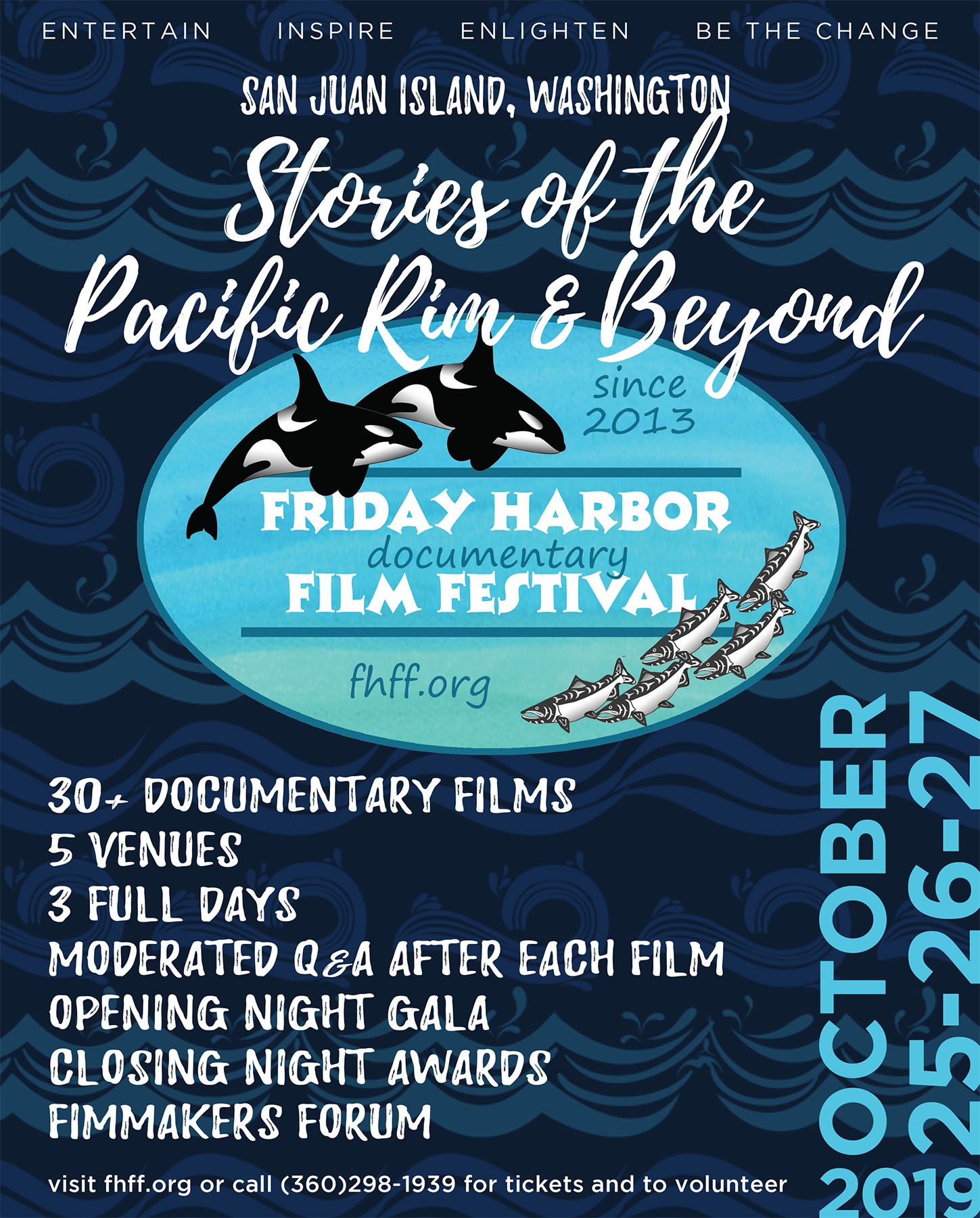 at Various locations
This event has passed.

The Friday Harbor Film Festival was started in 2013 and this year we will be celebrating the 7th annual documentary film festival October 25, 26, 27, 2019 in the historic seaside community of Friday Harbor on beautiful San Juan Island, Washington State.

Lynn Danaher and Karen Palmer founded this important documentary film festival, which continues to substantially grow each year.  The Friday Harbor Film Festival is recognized regionally as one of the premier festivals for documentary filmmakers to participate.   Thus fulfilling their vision to share compelling, relevant documentary films and to encourage viewers to be a force for positive change.

A very important aspect of the film festival is also to celebrate the filmmakers themselves, their hard work and dedication to their story-telling through their film craft. Every film allows time for the filmmaker or an expert on the subject to answer Q & A after screening the film.  This generates an often lively and very insightful level of dialogue.  Plus, the discussions insure both the filmmaker and the viewer a fuller, richer experience.

To date over 90% of the films screened each year has a filmmaker in attendance, from as far away as Europe and Australia.   The film festival usually selects approx. 35 films for the 3-day event.  Each film is screened at least twice in one of several venues/theatres.

The Opening Night Gala, Friday Night, is a big dressy party with robust appetizers and beverages at the San Juan Island Community Theatre.  During the evening we screen one of our highlighted films at our opening night Gala.

Most years we celebrate a Lifetime Achievement Award to a deserving individual whose nomination aligns with the mission of the FHFF; as it is not just a film festival, but it has a presence in the community to shine light on stories and people who make a difference.

The Film Festival closes with an Awards Night on Sunday; the audience selects films as their favorites.  The categories are: Tales of the Heart, Explorers and Adventures, Things to Consider and Local Hero’s, as well as the overall Audience Choice, Best Short film and Young Filmmaker film.

This 3-day event of quality film immersion promises to be both entertaining, memorable and inspiring!

We also offer the Film Festival On the Road “Best of the Fest” Film series.  To date we have hosted screenings of films in NYC, Kauai, Hawaii and Anderson Island, WA.   Please send an email if you are interested in hosting a one-day event in your community: info@fhff.org