Seattle’s own Betsy Olson will be opening the show with a special solo set of her kickass beautiful blues tunes.

About Led to Sea:
Violinist, Violist, Composer and Songwriter Alex Guy is the leader and principal songwriter for Led To Sea, a magnetic chamber-pop trio that fuses classical, pop and experimental music. Their live show has captivated audiences all over the U.S. and Europe, and draws comparisons to St. Vincent and Andrew Byrd. As a musician Alex has performed and collaborated with a virtual whose who of bandleaders, composers, improvisers and jazz musicians in the Pacific NW and beyond. Notable collaborators include Angel Olsen, Jherek Bischoff, Laura Veirs, Ahamefule Olou, Tucker Martine, Wayne Horvitz, Sera Cahoone, The Seattle Rock Orchestra, Mirah, Amanda Palmer, Xiu Xiu, Paranthetical Girls and many more. 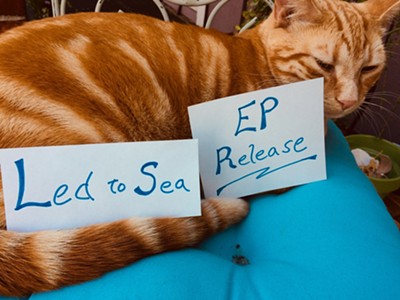