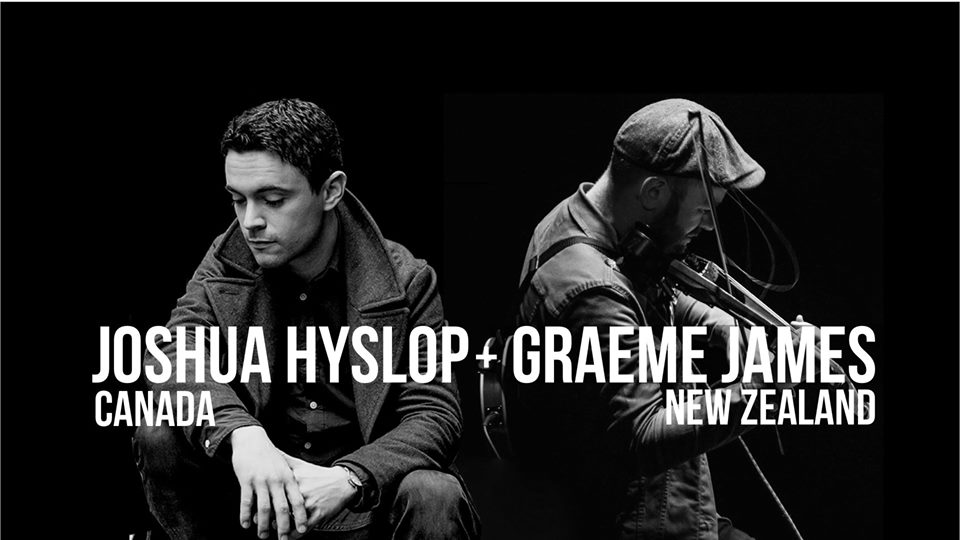 Hallowed folk artists Graeme James and Joshua Hyslop hit the road together this fall to bring you a show filled with enchanting stories and beguiling melodies.

James, originally from New Zealand, and Hyslop from Canada, first met when put together on Josh’s winter tour of his homeland in 2018. Those 10 days featured the most snow the Kiwi had ever experienced and the pair hit it off.

With over 25 million worldwide streams on Spotify and Apple Music, his songs have travelled the world before him, helping sell out concerts all around the globe. Having put together almost 1000 performances since 2012, 2018 was a breakthrough year of international touring for Graeme, including headline shows across New Zealand, North America, Australia, Ireland and the United Kingdom.

Graeme’s professional musical journey began with a blast in 2012 when he decided to become a full-time street performer in the windiest city in the world (Wellington, New Zealand). Battling the elements in all seasons, he honed his craft playing to appreciative impromptu audiences that frequently numbered into the hundreds,and led to the release of two crowdfunded albums: Play One We All Know and Play One We All Know, Vol II.

His career took a major turn after marrying a fellow musician that he met while jamming on the street. She encouraged him to play more of his own original music, and the resulting debut original album, News From Nowhere, reached #3 on the New Zealand album charts and was a finalist for Folk Album of the Year 2017. With his original music gaining significant traction at online streaming services, he inked a deal with renowned indie label Nettwerk Music Group. 2019 has so far seen the release of his acclaimed new album The Long Way Home, and another world tour playing music to his rapidly growing international fanbase.

Watch Graeme James Perform “To Be Found By Love”
On The Streets Of Wellington, New Zealand:
https://youtu.be/OgK3emo8pac


Empathy has been a consistent hallmark of Joshua Hyslop’s approach. His albums continually strike a human chord. Following a marathon run of 100-plus intimate “House Shows,” he released In Deepest Blue in 2015 and subsequently became a streaming phenomenon averaging over 1.6 million monthly listeners and touted on popular Spotify playlists such as “Acoustic Covers,” “Your Favorite Coffeehouse,” “Relax & Unwind,” and more.
“The Flood” generated over 14.3 million streams, while “The Spark” crossed the 9-million mark. Meanwhile, he would be featured by American Songwriter, NPR, Exclaim!, and more while regularly touring worldwide. Two years later in February 2017, he retreated to Afterlife Studios in Vancouver, BC to record album Echos.

Joshua returns this year with his new single “One Shot in the Darkness.” It is the first peek at the follow up to his celebrated 2018 album Echos. Joshua is currently in the studio finishing the album and will be sharing details soon. “This song is about the dichotomy I experience of wanting to go on tour and perform, while simultaneously wanting to avoid the spotlight.” He says of the track. “For me, this song serves as a reminder to give it a shot, even when it’s hard.” Since emerging with his 2012 full-length album Where the Mountain Meets The Valley, Joshua Hyslop has accumulated over 143 Million streams worldwide, performed over 250 shows spanning North America and Europe, garnered critical acclaim and support throughout the media and industry peers, and has carved out an impressive die hard fanbase.

Listen to Joshua Hyslop’s new single “One Shot in The Darkness”:
https://www.youtube.com/watch?v=3aNOyKUpFlM