A quartet of four bandleaders, Ponga began touring and recording in North America, Europe, and Japan in 1997. The music of Ponga is 100% improvised. The original band featured

In the spring of 2018 Ponga reunites with Previte, Horvitz and Skerik. Replacing Dave Palmer will be guitarist Mike Gamble

Bobby Previte- Leads his own ensembles including, Bump the Renaissance, Latin for Travelers, and Weather Clear, Track Fast. Recordings for Rykodisc, ENJA, and Palmetto. As a sideman has worked with Tom Waits, Terry Adams of NRBQ, Jane Ira Bloom, Ray Anderson, Johnny Copeland and minimalist composer John Adams. Commissioned to create music for The Moscow Circus and appeared in Robert Altman’s SHORT CUTS.

Wayne Horvitz-Current projects include the 4 plus 1 Ensemble and Zony Mash. Recorded and performed with Bill Frisell, Butch Morris, John Zorn (Naked City etc.), Carla Bley, Fred Frith, DJ Spooky and Robin Holcomb. He has been commissioned by the Kronos Quartet and the Paul Taylor Dance Company, done music for Gus Van Sant, and produced records for Eddie Palmieri, The World Sax Quartet, and Bill Frisell among others.

Mike Gamble -guitarist and multi-instrumentalist has spent the last 15 years immersed in the creative jazz, experimental rock and improvised music scene primarily in NYC.. He has had the pleasure of recording over 20 albums and touring the states, Canada, and Europe with his critically-acclaimed guitar trio The Inbetweens, Counter Record’s Cougar, and alongside doom-metal originators Earth. His more recent collaborators have been prestigious drummer Bobby Previte, bassist Todd Sickafoose, guitar virtuoso Nels Cline, and PNW cellist Lori Goldston. Since relocating to Portland Mike has been running a monthly Audio/Visual series featuring local and touring artists. Gamble currently holds a position as an Audio Production instructor at Oregon State University and is the Artistic Director of Portland’s longstanding experimental music organization, The Creative Music Guild. 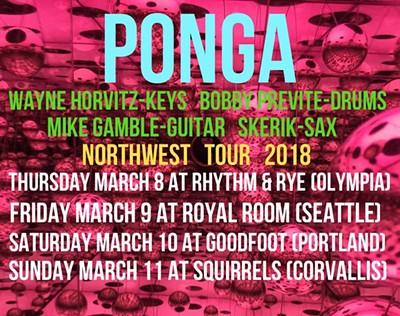