To guarantee a good seat, please make your dinner reservation by emailing reservations@theroyalroomseattle.com

Phoebe Ann Laub (July 17, 1950 – April 26, 2011) was born in New York City and grew up in Teaneck, N.J. After changing her name to Phoebe Snow, she would beocme one of the leading voices of the singer-songwriter movement, whose swooping vocal acrobatics transcended musical genres. “Poetry Man,” a lilting guitar-based original song from her 1974 self-titled debut album, “Phoebe Snow” (Shelter), catapulted Ms. Snow to fame.

Throughout her musical career Ms. Snow’s soaring contralto led her to be variously labeled as a jazz, blues, pop, funk, and gospel artist depending on the record she released. After her only child was born with a severe disability, Snow dropped out of the music for most of her life, dedicating full time caring for her daughter, refusing institutionalization until Valerie’s death at age 31. Snow’s brief return to the stage ended upon her own passing four years later.

In honor of her life’s work and her dedication as a mother whose love is deemed unconditional, this show is an epitaph to her rich voice, her music and arrangements, and to the poetry she effectively left behind. 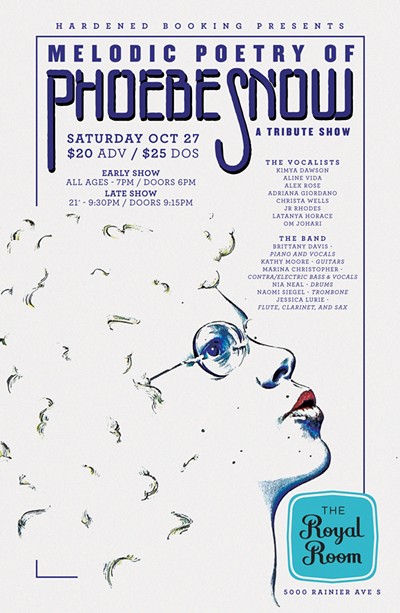