at online via Zoom
This event has passed.

Undressing the male body: unlearning and re-imaging the gaze

A talk with the artist Ann-Marie Stillion and SEAF festival director Sophia Iannicelli on the artist’s photographs including a world premiere of the short film, Loving Chopin.

“It is the continuation of a discussion which began last winter on lack of male nudes in art one chilly art walk eve at Gallery Erato between the director and I. We quickly found a bond in our shared view that men have gone missing, at least if they are naked, when it comes to mainstream art channels.

I will trace my own journey and fascination with this new art form: women-identified photographers turning their gaze on the male body and some of my experiences in the field, on photo shoots and in the live gallery experience.” Stillion said.

Artist Ann-Marie Stillion has worked as a journalist, writer, filmmaker and photographer. She taught design in San Francisco and built a contemporary gallery in Arizona in the nineties. In 2013, she began to concentrate on the nude, sexuality and is especially interested in male ideals of beauty, eroticism and meaning. Her studies of the human portrait include installation, sculpture, and film as well as the traditional photograph on a broad spectrum of society as well. Her submissions for SEAF are from several series including Sex in Space, The Female Gaze, Camera as a Lover and Transformation of Love. She lives in Seattle and maintains a studio in Building 30 in Magnuson Park. Currently, she is working on new film and print projects. Since 2013 she has concentrated on themes of sexuality and particularly the male figure through large scale photographic installation, film and print. She is interested in the imaginal body outside the confines of historical gender and social expectations. Sex in Space, The Female Gaze, Camera as a Lover and other Transformation of Love are portfolios she has created out of this exploration.

Registrants will be emailed meeting login information before the meeting time on Sunday, September 20th. 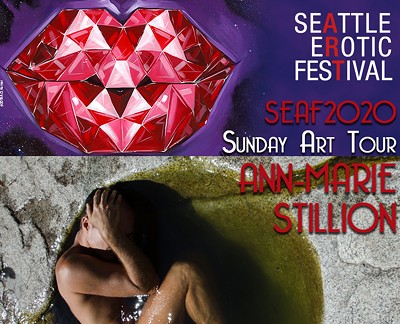 All workshops are in Pacific time zone.

Consent in the Workplace

Outside Monogamy - Balancing Autonomy and Connection

Consent in the Workplace